Okay, so you got lured into the idea of hacking a Facebook account? I won’t ask why. Everyone has their reasons. If you came here to learn how to hack a Facebook account, feel free to leave, because the title read – Hack Facebook Account : Stuff You Should Know – and not – How to hack a facebook account (well actually don’t leave, I have something for you later in this tutorial, something on actually hacking Facebook) .That being said, there are a lot of real hacking tutorials around the website you might want to read. However, if you are here on a pure curiosity basis, then read on, and you will be a smarter person by the end of this post than you were when you began reading it.

First, because you can’t. Well, actually you can, but the high improbability of success makes it stand next to you can’t hack facebook. If you think typing ‘hack facebook account’ on google, clicking on the first result, and entering the target’s email address will give you the password of his/her Facebook account, then you are not on the general level of stupidity, you have achieved an appreciatively high one. Come on, if it were so easy to hack a FB account no one would be using FB to start with. There is so much on our Facebook account that we can’t even imagine the consequences if it were to get into the hands of a seasoned hacker, leave alone a novice (not even a novice for that matter) who just searched google for hacking facebook.
impossible, so much so, that I won’t be exaggerating in saying that it can’t be hacked. As far as the picture on the left is concerned, its one of the many tools offered on the internet, all of which have the following in common- 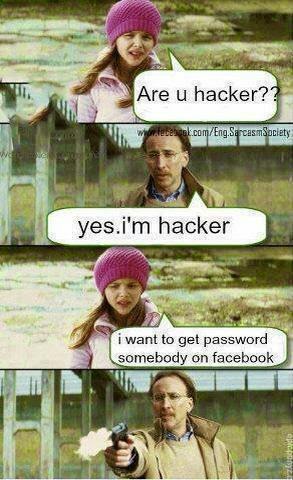 What is the actual meaning of hacking Facebook. Most of us are misguided by the term hacking in general. Hacking incorporates the attainment of someone’s password, but hacking is so much more. Account passwords to hacking are just like coins are to the subway surfer game. You get coins along the way, your progress is partially judged on the basis of coins acquired, but the idea is to find your way through the obstacles and keep moving ahead. In general sense, when you use the term hacking Facebook, you mean to understand the functioning of the website, find out about its database management systems, scripts employed, use of cookies, language on which it is built on, etc. Then you find vulnerabilities in the working of the websites, and code exploits to break through the obstacles and gain privileges into their systems, using suitable payloads. The next step would be privilege escalation. For example, you found out a vulnerability that allows you to look into the database and see the email address and cellphone number of any user. You would want to escalate your privileges and also gain access to their passwords. The last step may be setting up a backdoor, for quicker access next time. Another step might be to clear your traces so that you don’t get caught. And trust me, you can’t do this. I mean you wouldn’t be reading a blog on beginner level hacking on Kali Linux if you had so far with web pen-testing. So, the conclusion is that hacking Facebook is a real big deal, not everyone’s piece of cake (I admit even I’m nowhere close to the level of expertise where I would be playing with databases on Facebook servers). And the Facebook passwords are just a reward that you get after hacking Facebook. But are we missing something? There can’t be only one way to get someone’s Facebook password. I mean we don’t want administrator access to all the Facebook databases, just a password of one of the millions of users. There must be a hole somewhere. That kid next door claims he can get Facebook password of anyone, and he’s good, but not ‘code a exploit for Facebook’ good, no, not that good. This is where social engineering steps in. 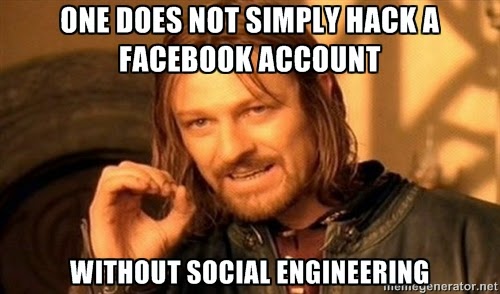 With time, the level of security in all fields of life keeps getting stronger. The element of encryption has reached almost unbeatable stage. With 256 bit encryption, cracking will take practically forever. The element of laziness is in our favor (not everyone upgrades to latest security measures), and so is the element of cost-effectiveness and carelessness (you don’t picture a nerd kid with glasses next door when you are deciding between WEP and WPA for your password). But nevertheless, things are changing, but one thing remains constant. Humans. Humans in general are stupid. Not really, a better word would be ignorant, not aware of how stuff works. Most Facebook users have no idea about what all Facebook is doing for their accounts security, and how easily their carelessness can ruin each and every one of Facebook’s effort to protect their private information.

HUMANS ARE THE WEAKEST LINK IN ANY SECURITY SYSTEM 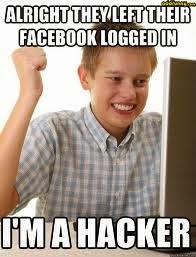 From leaving one’s account logged in to not paying attention to someone who’s peeping from behind, watching them type their passwords, humans can be really ignorant. But we need not rely on this level of ignorance for passwords (I stopped using the word stupid because it’ll definitely annoy and offend people. I mean not good at computers doesn’t really mean stupid. They have other stuff to do than protect their accounts). We can very well get the password of an average internet user who is not very paranoid and cynical about stuff. We can’t hack Facebook and gain access to their servers, but your friends machine isn’t that well guarded. A virus binded with a game he asked you to fetch in a USB drive? An average person won’t think that you might have planted a trojan or a keylogger in the USB drive when he takes a file from you. Or maybe send him a link which will silently install some malware in his computer. Many people don’t think twice before clicking on a link (some people do, though). Or maybe make a fake login page and send him a professional looking email, directing him to a website where he ends up receiving a login page somehow (you have to make it look real and genuine, backed up by a nice story, that you can expect the target to buy). There are many more methods. As far as the promise for something later in this tutorial about actual Facebook hacking, I have provided you with a small trailer about what you can do, in the next few tutorials we will discuss stuff in detail. The first tutorial is here.